Favorite New Comic Book: Steeple. This 5 issue series form Dark Horse, by writer/artists John Allison, tells the story of Billie Baker the new assistant pastor in the coastal Cornwall town of Tredregyn. Where she tries to teach the kids about Jesus by helping them win rap battles,  deals with the vicar who wages an unnecessary war against the deep ones,  tries to stop Christian singers who are try to jump start the rapture by using windmills, has a vacuum cleaner that seems to run on magic, and accidently signs up to volunteer for the towns biggest money maker the yearly witch festival (She thought it was a woman’s empowerments music fest) and did I mention that  her best friend is Maggie Warren the number two at the local church of Satan.

The relationship between Billie and Maggie is what makes this series. Despite the fact that they are on opposite sides of the theological fence they are the only ones in the town that truly get each other. They are like sisters who never knew each other, till they were adults . They want their opposite to join their side but seem afraid that if they changed the other, they wouldn’t be what makes them so great.  I hope this series goes more than just 5 issues, and I really want to know what’s going to happen now that Maggie realizes that God still considers her holy and what happens to Billie when her naiveite rubs off.

Favorite Comic Book Issue: Dr Aphra Annual #3. Doc A only shows up in the beginning and end of this comic, and even then, as a holographic message, but don’t let that fool you, this is truly an Aphra story. It plays to her strength, that she is basically the smartest being in the room (any room she is in.)  She understands how humans and other creatures think and exploits it. This is what has kept her from being skewered by Darth Vader’s light saber for so long. The good doctor’s plans don’t always work the way she wants it to, but when it does, it comes together so ingeniously, that even Joker and Bat Man would have to say “Dang Girl!”

Favorite Manga: HP Lovecraft’s At The Mountains of Madness.  This two-part epic by artist Gau Tanbe is beautiful. Let me repeat this it is beautiful!!!! Even HP’s rugged adventures come off with an androgynous beauty that I am sure that the Old Man from Providence never imagined, but this in no way takes from the story. The scenes of Antarctica and the alien city are phenomenal.

Tonabe follows the storyline pretty much the way Lovecraft wrote it, with only a little dialog added for effect and drama. In general, I agree with the ‘you can do HPL in a visual medium’ train of thought, but this is an exception. The beautiful art work adds to the alieness of the story, instead of taking away from it.

Favorite Otherworld: Joker/Harley: Criminal Sanity. Not truly an Other World story but it is not set in the cannon DC universe, so I stuck it hear. Writer Kami Garcia tells the story of police profiler Harlen Quinzell, whose lover was killed by a mysterious psycho slasher called the Joker. Now GPD is going to consider the case cold, and this is her last chance to get the maniac. 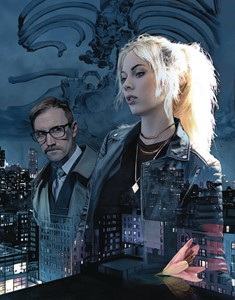 I love this version of Harley, brilliant, tough and obsessed, ready to find the man who killed the love of her life. In the first issue Bat Man only appears once and may have been the catalyst for creating the Joker. I love the brilliant way that current events appear in black and white and flashbacks are in color, this tells you things in this world are backwards. When Harley describes in graphic terms the effects and actions of real-world serial killers, it is truly horrifying.

Favorite Comic Book Crossover: Lights Skin & Earth. Canadian singer Lights (Valerie Anne Poxleitner) is a geek and proud of it. She wrote a comic book called Skin & earth. It starts out a dystopian have and have not story, and then is sprinkled with unearthly enties and Lights unique version of spirituality, become a twisted roller coaster of a fairy tale.

But that is not all she also released a concept album to be listen to when reading her comic. I really wasn’t that impressed by her work before Skin and Earth, but I love sme of these songs. Some videos had been adapted as scenes form her comics, which is cool because the series has been opted for a TV show.

This entry was posted on December 28, 2019 by davekheath in Uncategorized.