The New Alien Shorts are Awesome!

I am writing this on April 26th, AKA Alien Day. 4/26 was selected for Alien Day because the planetoid that the Nostromo’s crew found the xenomorph on was LV-426. As a sci fi holiday Alien day is not as celebrated as its big brother May the 4th. With only a few hardcore Alien fans and a few retailers doing anything. This year however Fox and IGN gave us an awesome AD present by releasing the last of their amazing short films.

And do we have some thing to celbrate. The release of  the last of 6 Alien inspired short films. I truly enjoyed every one of them. You can tell that the aspiring filmmakers and actors truly know and love the subject matter, but they never treats the topics as too sacrosanct, so the project is way above most YouTube videos but never gets wrapped up in its self.

In ways they remind me of my beloved old Dark Horse Alien comic books expanded universe We get 6 different views into the lives of ‘blue color’ everyday men and women of the galaxy. We can relate to most the people in the shorts, we see them as us in a high tech, high action setting. The film makers also cleverly used the same, less is more approach of the original Alien film, by revealing the xenomorph only at appropriate climaxes, with stunning effect.

They are a combined effort of video game website ING and 20th Century Fox, so they are cannon, and they well deserve to be. They are better than nearly everything (except the non-cannon DH EU comics) that came after the Ridley Scott and James Cameron movies.

We see all the Alien tropes we love. Cthulhu in space! a badass woman surviving events she wasn’t trained for, the diabolical company, milk white blooded androids, space truckers, isolationism, a weird hybrid of future and 1970’s tech, large un-streamlined ships and of course an alien bursting out of a human. Bower these shorts don’t seem like clinches or old hat, maybe because they are so short, they only have time to tell the story, with little or no padding.

So here are some of my impressions on the 6 different stories.

Containment: A spaceship with 23,0000 people on it is destroyed to contain a xenomorph outbreak. Only four people survive, in a escape pod two space truckers, a corporate scientist and a unconscious man. Distrust arises when it is revealed that the scientist was responsible not only for the outbreak but the destruction of the original ship. 99% of this short is good, but it is the last 10 seconds that make this one a masterpiece of terror worthy of HP Lovecraft. There are stills of the ending online, and I was tempted to post it here, because it is a truly chilling picture, but I chose not to because I didn’t want to spoil the ending. Check it out yourself. Now when I say last 10 seconds, I mean the last 10 before the credits, there is a post credit stinger that doesn’t really add to the atmosphere of the short. 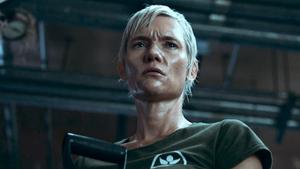 Specimen: A woman is working the late shift in a greenhouse by herself, except for her dog Maggie. She comes across some undocumented soil samples, which contain a face hugger. Despite her best attempt to quarantine it, it gets out, then she is locked in with it, with only her trusted K9 companion, to help her survive. I figured out the twist ending a few minutes before the climatic resolution, but even though I guessed how it would end it was done so well I didn’t feel cheated or robed. It is nice to know that even if you can’t hear it in space, punk rock still exists in the future. 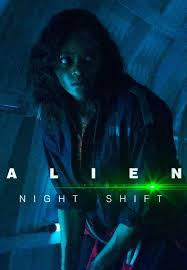 Night Shift: Two space truckers show up at a company store 10 before it closes, in what becomes the Alien equivalent of noir ‘’knock over a gas station’’ story. It is always the last bit of a work shift that kills you. If I am not mistaken the hand cannon in this tale is reminiscent of Deckard’s gun from Blade Runner. It also answers the question “What good did baseball ever do?”

Ore: There has always been a company versus the workers vibe in the Alien franchise, and this short may be the best example of that yet. A group of Platinum miners are trapped in a mine with a xenomorph. This time there is a twist, the company wants to get the workers out of the mine because they might damage the valuable alien specimen. The miners however want to take on the xenomorph because they are afraid what it might do it gets to the surface where their families are. This short shows what the salt of the Earth (or space) can do when they are defending the ones they love.

Alone: I love all 6 of the shorts, but Alone is my favorite. Hope is a young woman who is the last crewmember of an abandoned freighter that has drifted beyond explored space. The isolation has driven her mad and when she encounters an alien face hugger she takes extreme actions to keep her only companion alive. Part of what makes this one so much fun is how Hope is played by Taylor Lyons. If this is any indication of her work, she should have quite a career ahead of her. 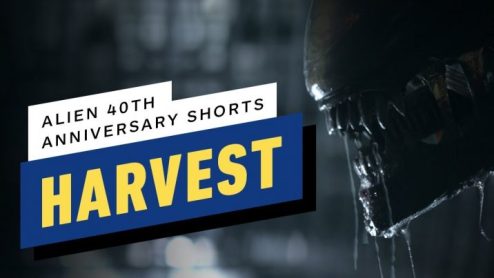 Harvest: A pregnant woman and three others are the last survivors of a comet plasma harvester, which is over run by xenomorphs and its navigation system is offline so it will crash into a comet in 6 minutes. It is a race against time to the find a way to the escape pod, that is not blocked by aliens. This one shows off how ruthless the company really is.

5 comments on “The New Alien Shorts are Awesome!”

This entry was posted on April 27, 2019 by davekheath in Uncategorized and tagged Alien, Aliens, monsters, Movies, Science Fiction, Short films.