Women in Comic Books who are more than Skin deep: #1. Deadly Little Miho.

Women in Comic Books who are more than Skin deep: #1.

Appearances: Sin City: A Dame to Kill For, The Big fat Kill, Family Values, And Behind Door Number Three.

Quote: None, never ever speaks.

All my friends know I love deadly Little Miho, and none of them will be surprised to see her on the top of this list. But I am not her biggest fan. The number one Miho fan-boy would be none other than her creator, Frank Miller. When someone like Quinton Tarantino says you have a fetish like relationship with your character, maybe you should back away from you work for a bit.  But that love which Miller pours into her is what makes her such a great character.

Miho is the protector of the ‘girls of Old-town’ in Sin City. She herself however is never portrayed as a prostitute, only their protector. This is important because she is the only female character in Sin City whose primary characteristic isn’t her sexuality. Even Marv’s aged mother’s is primarily defined by the fact that she is a mother.

One reason for her asexual-ness, in a hyper-sexually charged title might be that she is not of this Earth.  Miller has explained that she and Kevin, the other mute assassin are actually demons, or Kami (Japanese spirits/minor gods).  He calls Miho a ‘good demon’. This is kind of surprising because there is not a lot of the supernatural in Sin City. But in hindsight, it explains things, like why she is a protector, why she remains silent all the time, her preternatural combat skills. And her harsh code of vengeance.

Her silence is also important in the light that Frank Miller, is in my opinion not only the best dialogist in comics, but also the best living dialogist in the English speaking world. Sin City is built on its gruff and gritty words as much as it built on scantily clad, submachine gun wielding women. That Miho and Kevin both never say a word is obviously important. Yes Cardinal Roark says Kevin speaks to him, but the audience never hears a word from him, even when Marv is torturing him. This makes them different form all the others in the yarns, and also gives them an unearthly vibe.

The closest male in her life Dwight, comments on how cat like she is. Her balance, how she plays with her victims and how she takes quick short naps. He seems to take this in stride, but I get the sense Dwight knows that there is more to her than meets the eyes. I think this is Miller giving us clues to the fact that she is not human.

Miho is also very loyal. The closest thing that Sin City has to a true partnership is Miho and every man/wanted murder on the run Dwight. She owes him a debt of honor because he saved her from an ambush by Chinese gang members. She even chose him over usual masters Wendy and Goldie the leaders of the gals from Old Town, much to the twin blonde’s surprise. In Basin City you can’t trust anyone. Cops literally shoot each other in the back, but despite that Miho and Dwight, know that count on each other when things start hitting the fan. 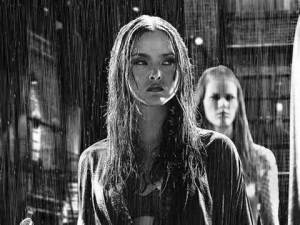 Most comic books do not translate well into movies. Sin City is the exception to this. Devon Aoki nailed the part of Miho perfectly. Just as she didn’t know how to drive until she got  a part on 2Fast 2Furious, Devon didn’t know anything about martial arts or sword fighting, before this movie. She was moved by Frank Miller impassioned description of his creation to her, that she put her whole heart into it. She did it so well that, after filming was wrapped up, Frank Miller gave her Miho’s samurai sword. (Rumor has it he stole it out of Quinton Tarantino’s garage, since it was also used in Kill Bill). If they finally get around to doing Sin City 2, it will probably be Jamie Chung playing Miho since Aoki is having her second child. And though I will miss Devon after seeing Chung in Sucker Punch I think she is a good second choice.

For saying so much without speaking a single word. For being enticing without trying to be sexy. And being one of the most deadly forces in Basin City without carrying a gun. Miho is the number one woman of comics who is more than Skin deep.

8 comments on “Women in Comic Books who are more than Skin deep: #1. Deadly Little Miho.”